Our ability to accomplish projects of all sizes with the same attention to detail and our expertise in internal finishes has won us the respect of the UKs leading companies. This in turn has given us the opportunity to work on high profile projects in the Student Accommodation, and a proven portfolio of services and expertise.

"Supporting the University of York’s “Campus for the Future” masterplan, we are delivering a major 1400-bed student accommodation project.

The £130m flagship scheme, which will help to transform the Heslington East Campus, began in November 2019 with scheduled completion ahead of the 2021 academic year.

We have adopted an off-site modular solution for our construction programme, a methodology that brings enhanced quality and delivery confidence to the ambitious residential scheme. In addition to influencing design in partnership with Sheppard Robson (architects), and executing the project build, we were also a key project investor as part of a consortium" - Grahams Project page www.graham.co.uk 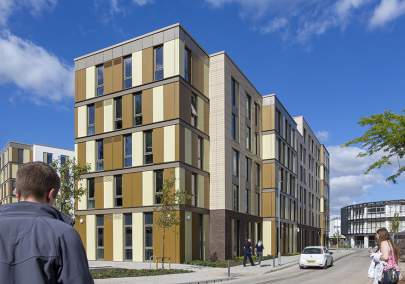 The former car park on the edge of the site has been transformed into a vibrant new Student Quarter linked to the main University Campus. The complex comprises of nine blocks arranged around a central plaza at the top of a village street with a convenience store, central green and cafe. It features a range of 1,462 single rooms and one-bedroom apartments. 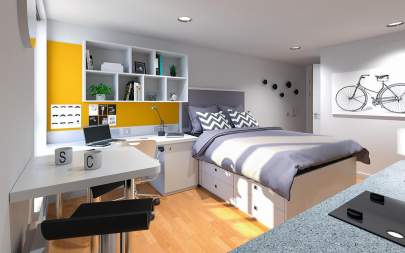 SCS worked on the prestigious Student Castle Accommodation for Vinci Construction. In a historic conversion alongside a contemporary new build, set in the historic City of York close to all amenities. 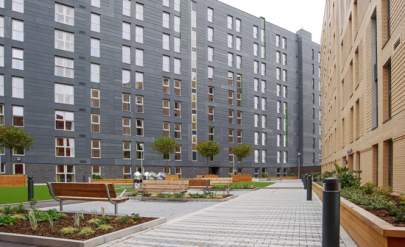 One of Europes biggest single phase student accommodation builds is most complex in Grahams 240-year history.

SCS were assigned the SFS, Partitions, Suspended Ceilings and Fire Stopping on the Project.

The mammoth development, providing almost 1,400 individual bedrooms for students at the University of Salford.

The project, which comprises nine residential blocks on two separate sites as well as teaching accommodation, cinema, gym, energy centre, laundrette and conference facilities, is regarded as a game changer for the university.